My two-year-old, Catherine,  is what I call mischieveous. (My husband calls her evil, but I prefer mischieveous.) She started walking at eight and a half months and has been on the go ever since. I had a friend tell me I could devote an entire blog just to her antics, and she is probably right. For now I have decided to make a list of ten of the more memorable things she's gotten into this year.

(I do have one honorable mention that didn't quite make the cut. About a week ago she pulled the needle out of the almost-done baby blanket I was knitting for my sister who was due yesterday. Unfortunately, it will not be done when her little boy arrives.) 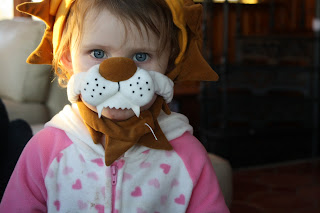 10:  Unraveled an entire roll of toilet paper and put it in the toilet, which my poor husband had to scoop out.

9:  Painted her face black with my mascara.

8:  Dumped an entire bottle of laundry detergent all over the laundry room floor. At least the towels used to clean it up were ready to be thrown right into the wash.

7:  Tried to run down the stairs at Grandma's, resulting in a mild panic attack for Grandma and a chipped tooth for Catherine.

6:  Tried to go fishing in the fish tank much to the chagrin of our angel fish, Superhero.

5:  Dove into the bathtub head first in her pjs while I was washing my hair.

4: Poured baby powder all over the bathroom, and herself. I came in to find her naked in the bathtub, completely white.

3:  Came into the living room carrying a raw egg yolk in the palm of her hand. The rest of the egg was in the dining room, and I'm still not sure how she got the yolk out without breaking it.

2:  Put toilet paper into my friend's bathroom sink, then turned the water on and nearly flooded the bathroom. (Her sister caught her before it got that far- just before.) This is high on the list seeing as it was at a friend's house and therefore that much more embarrassing.

1: Fell out the living room window. Okay, this one was on my husband's watch. He says he was right in the room talking to our son, Johnny, when he heard a crash, turned around and saw the screen and the child missing. He freaked out, Johnny, however, apparently didn't miss a beat and kept right on telling his story.

I realize this probably makes it sound like I really don't watch my kids, but I do! Really! Catherine is just always on the go and with the addition of Margaret into the family it is just not possible to keep an eye on her every move. So far she has not had any major injuries. No cracked skulls or broken bones, so I'm calling it a win.
Posted by Rachel Schieffelbein at 11:20 AM