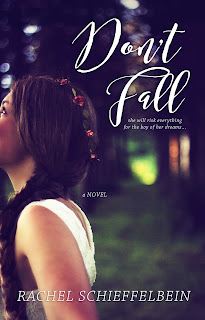 In this modern day retelling of Rapunzel, Anya has her books, her photography, and her daydreams. She doesn’t think she needs anything else.
She lives in a house on the edge of town with her adopted mother, who goes to extreme measures to keep her daughter safe. Anya doesn’t even go to school, but instead has a private tutor. Anya tries not to acknowledge her loneliness; she puts her efforts into pleasing her mom, and gives her heart to her stories, secretly wishing for a story of her own.
Then one day at the library, the only place she's allowed to go, she takes a picture of a beautiful boy.
Before long she's lying to her mom, and sneaking out late at night to meet Zander. But Zander wants more than a secret romance. If Anya wants to be with the boy of her dreams, she will have to risk her relationship with the only other person she's ever cared about.


When Mabel's best friend, Amber, drags her along on a double date she finds herself falling for Lance, the obnoxious class clown whom she swore she'd have no interest in. The only problem is, she's not sure if she's really the girl Lance is into, or if, like every other guy she knows, it's really Amber he's after. One thing is clear, if Mabel wants to be the lead in her own love story, she needs to start acting like it.


RUN FOR THE ROSES
YA novella
coming soon


Abigail Conrad has one goal: Win the roses at the Arabian Youth Nationals. It is the thing she has spent all her time and energy on, and since she's going off to college in the fall, this is her last chance to be a Youth National Champion. Nothing could distract her from her goal.

Except maybe Chase. The far-too-handsome older brother of Abigail's biggest rival. He's charming, funny, and Abigail's biggest problem. How can she focus on her ride when her mind keeps wandering over to Chase's green eyes and confident smile?

Abigail had better learn to balance her ambitions and her attractions or she'll lose the roses and the guy.

I also have a short story in a YA steampunk anthology called REAL GIRLS DON'T RUST, published September 17th, 2013, from Spencer Hill Press.

A girl made of metal doesn't need to fear a wolf. He should fear her.

Available from Amazon, and  Barnes and Noble.