How to Seduce a Band Geek releases today!! Congratulations to Cassie Mae!
This is perhaps my favorite book of Cassie's to date. I LOVE Sierra,
and so much about this book is just fabulous!
If you like funny, sweet, emotional YA
you want to check this one out! 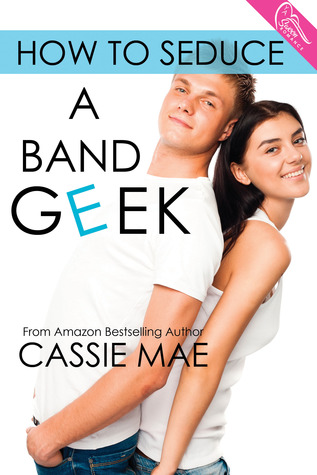 Sierra Livingston’s got it bad for her sister’s best friend, Levi Mason—the boy who carries his drumsticks in his pocket, marches with the school’s band, and taps his feet to whatever beat runs through his head. Sierra racks her brain for ways to impress the sexy drummer, but the short skirts and bursting cleavage don’t seem to cut it.

When Sierra gets paired with Levi’s sister, Brea, for a mentorship program, they strike a deal. In exchange for Sierra keeping her mouth shut about Brea ditching the program, Brea lets Sierra dig for more info on Levi to help get the guy of her dreams.

But when Sierra discovers Levi no longer plays the drums, his family has moved into a trailer, and he’s traded in his Range Rover for a baby blue moped, Sierra’s not sure if she can go through with violating his privacy. She’ll have to find the courage to ask him straight out—if he’s willing to let her in—and explore other ways to seduce the school’s band geek.
You can find it on Goodreads, Amazon, and Barnes and Noble.
Posted by Rachel Schieffelbein at 5:25 AM