Today we are being joined by the wonderful, hilarious Theresa Paolo. I've had the pleasure of meeting Theresa in real life and she is an absolute doll! (Almost literally. She's very tiny.) ;)
Her debut New Adult novel, (Never) Again, comes out tomorrow! And even though I've already read it I can't wait to buy a copy and read it again. :) 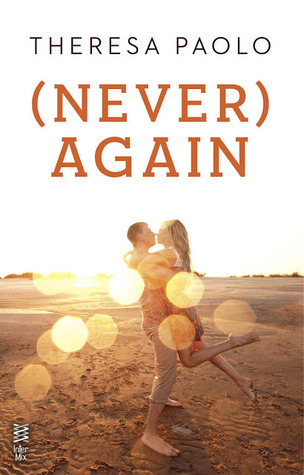 Just when she had finally moved on…
…He moved back.

When college freshman Liz Wagner hears her ex's voice for the first time since he moved clear across the freaking country, she does what any respectable girl would do: Dive into the girls' bathroom.

Zach Roberts—the Zach Roberts—is back. And he’s everywhere Liz looks—infiltrating her friend group, buddy-buddy with her brother. It’s enough to ruin college altogether. But what choice does she have but to put on a happy face and pretend he didn't leave her vulnerable and alone in a pile of emotional wreckage?

Pretending works, until tragedy strikes and the only person available for comfort is the one person she wants to stay away from. When Zach turns out not to be the jerk she convinced herself he was, but the boy she used to love, Liz needs to decide whether to open her heart again to the boy who tore it out.
Let me start by saying, I loved this book! I really liked Liz and wanted the best for her, but she continued to make stupid decisions! Was it hard to watch your character be with the wrong person? Was it tempting to just fix everything for her right away?
You're making me blush! I remember being so nervous for you to read it.

You were nervous for me to read it? That blows my mind! Lol. And kind of makes my day. Sorry. ;)

Before we get started I just want to say thank you for having me! Liz did make stupid decisions. I wanted to strangle her most of the time. Seriously I did. Watching Liz stay with the wrong guy was really hard.
So many times I wanted to
change her decisions and even when I was finished writing I thought about going back and rewriting it to have her be less naive and make better choices. I didn't. The reason being because she's eighteen. Who didn't make stupid mistakes at eighteen? I made too many to count. Some that even to this day I think about and wonder if I handled it differently would it have changed anything. I didn't want to take that away from Liz. The person I am today is because of the mistakes I made in my past and what I learned from them. I wanted Liz to be real. I wanted people to relate to her because of her flaws. So while it was extremely hard not to fix things for her, ultimately it was what was best for her and the story.


Liz had her heart broken by her first love, and now he's back in her life. Do you remember your first love? Do you look back with fondness, or hate his guts?
I actually do remember and I don't hate his guts at all. Even when he broke my heart I didn't hate him. He's like a brother to me now.


That's so sweet!
And while we're on the subject of first loves and such, just for fun: What was your first kiss? What was your worst kiss?
Is it bad that I don't remember my first kiss. *thinking* I'm pretty sure I was young. I think I was twelve and we pushed our lips together, counted to five in our minds and pulled away. Probably why it wasn't so memorable. lol! I don't think I have a worst kiss, I guess I've been pretty lucky. I don't have any horror stories like some people. I kind of wish I did. I would totally laugh about it now. What about you guys? Worst kiss? I would love to know. They're always good for a laugh. Thanks, Rachel! These were awesome questions :)
You don't have a worst kiss? Lol. I can think of three that would all be closely tied for me!
Don't forget to add it on Goodreads! And starting tomorrow it will be on Amazon and Barnes and Noble as well! :)
Posted by Rachel Schieffelbein at 5:19 AM