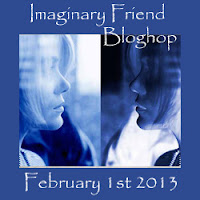 Today is the Imaginary Friend Blog Hop hosted by the lovely Annalisa Crawford and Kyra Lennon. Annalisa is celebrating her book's birthday! Cat and the Dreamer will be one year old on February 14th. Happy Book Birthday!

If you haven't read Cat and the Dreamer, you should. It is very beautifully written, with a main character who will pull at your heartstrings.

I think it was because the others were both girls. (As is child #4, so he's still the only boy.) I'm guessing he was jealous that my oldest got a little sister to play with, but he didn't have a brother. So he made one up.

Jack was talked about a lot that year. Johnny would tell us about all the super fun exciting things he and Jack were doing. (And yes, I think it's funny that the name he picked for his friend is a nickname for his own name.)

There were times it got a bit awkward and I would feel the need to explain to people what was going on. Like when he told our EFCE teacher that him and his dad had spent the weekend at his brother's house.

"Um yeah," I told her, "it's an imaginary friend. My husband does not, in fact, have another family somewhere else."

Posted by Rachel Schieffelbein at 5:34 AM