I am so excited for the What If blog fest! I love fairy tales, so this is right up my alley. I've already read a bunch of great entries, and I know there are more coming. :) A big THANK YOU to Cassie, Morgan, Leigh, and Mark!

They are dividing up the judging as follows:
· Best Plot Twist - Cassie 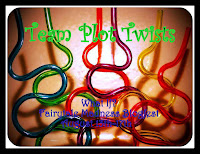 You can click on any of the links above to go sign up!
I've decided to join Team Plot Twists with my new spin on Cinderella.

The shoe was the second thing Ella noticed when she stepped into her house that night. The first was the blood pooling under her father's back. The stiletto, just a few feet away, was the same shade of red.

Her eyes had been drawn to it as she ran to her father's side. She knew right away who it belonged to, even though she'd never seen it before. It was always that way with her and shoes. One look and she knew things about the person who owned them, sometimes more than she wanted to know.

It was how she'd known that woman was pure evil the moment she had stepped into their lives last year in a pair of hideous black and white pumps. Her father hadn't seen it. He'd married her anyway. And now the life was bleeding out of him, and it was all because of her.

Tears seared down her cheeks and her chest burned with anger as she held her father's cold hands.


She would make her pay, somehow. Ella knew she couldn't go to the police with a secret-spilling red high heel. She needed real proof, and it was going to take a lot more than proving that the shoe fit.
Posted by Rachel Schieffelbein at 7:44 PM